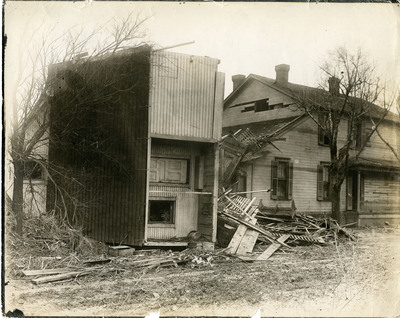 A home flipped onto its side by the flood waters. On the right side of the photograph is a home that sustained less serious damage, and a pile of flood debris. On the back of the photograph is a handwritten account of one family's experience, possibly the family that lived in one of these homes. Mr. and Mrs. Patterson, African-Americans, sought refuge in their attic, where they broke open a hole in the wall for air (possibly the damage seen in the photograph). As the waters continued to rise, they crawled to the roof, where they remained until Thursday morning. They were rescued by the Sisters of Notre Dame, a religious order who taught school in Dayton. The Pattersons were Catholic, and had a daughter, Sister Martina, who was a member of an order of African American nuns in Baltimore, Maryland. [From back of photograph] Washington Street. Got to attic -- broke open side for air. Crawled to roof till Thu. a.m. Rescued by N.D. [Notre Dame] Sisters. Mr + Mrs Patterson. Mrs Robinson. Cath[olic] have a daughter. Colored nun, Sr. Martina, Balto. [Baltimore]. Boat to door, Mrs. Patterson fell at [illegible]. N.D. felt frozen.