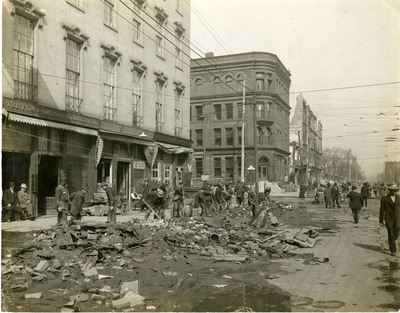 The businesses on Third Street in Dayton were badly damaged by the flood; waters in this area reached nine feet in depth. This photograph shows the cleanup efforts at the intersection of Third Street and Jefferson Street. The Fourth National Bank is in the center of the photographs. The buildings past the Fourth National Bank to the east were destroyed by fires. The building on the left housed the American Express Company, the Western Union Telegraph Company, C.R. Kalter's Drugstore, and the First Savings and Banking Company of Dayton. The First Savings and Banking Company experienced significant damage to their facilities, but proudly reported that 'all currencies and securities inside their safe were found as crisp and dry after the flood as when they were put into the safe,' making them the only bank in Dayton with paper money surviving the flood.