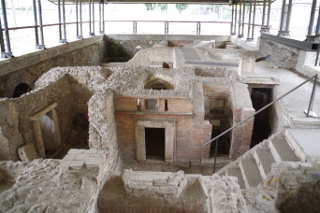 Roman Cemetery along the Via Ostiense

The Roman cemetery along the Via Ostiense is an archaeological site owned by the city of Rome and managed by the Sovrintendenza Capitolina. The site preserves the extant part of an extensive necropolis on the Via Ostiensis from Rome to its port at Ostia, about 2 km outside the city walls. At this point, the street passed between the Tiber river and the rocky hill Rupe di San Paolo. The cemetery was in use between the first century BCE to the third century CE. During this time, the area was gradually filled with tomb monuments until it was built up quite densely. Like in other Roman cemeteries, the tomb monuments were lined up on the street but also along secondary paths that provided access to posterior sectors on the slopes of the hill. Compared to other ancient cemeteries in Rome, the tombs were relatively small and unexceptional and the tombstones from the area show that they were used by “regular” urban residents who were neither particularly privileged nor destitute. The earlier burials are cremations, but in the second century CE the burial custom changed to inhumation in the entire Roman empire, which is also evident here. The area was excavated in the late 19th and early 20th century and for the most part reburied, with the exception of this particularly well-preserved part. After the excavation by G. Lugli in 1917, the area was consolidated, made accessible with walkways and protected with a roof. In its current state, the site provides an impression of the appearance and development of a relatively long stretch of the suburban landscape. The site is currently the object of a new research program under the auspices of the Sovrintendenza Capitolina that investigates its geology, architecture, tombstones, and human remains.

Browse the Roman Cemetery along the Via Ostiense Collections:

3D models of the Roman Cemetery along the Via Ostiense