The Move to Carthage

By 1870, the inner-city location around the Convent of the Good Shepherd had become highly industrialized and crowded.  The Sisters sought a country refuge where they and their charges could escape these urban conditions, and in 1871, bought a small farm east of Carthage, outside the Cincinnati city limits.  The convent and school established there eventually took the place of the Bank Street location, and was known as Our Lady of the Woods.

"Through the munificence of loyal benefactors such as R.R. Springer, S.S. Boyle, James Walsh, Chas. West and others, Mother Mary of St. Joseph was enabled not only to build a handsome Chapel on Bank St, but to purchase a beautiful farm at Carthage, Ohio, and erect substantial brick buildings on the same...As the city grew and the Convent at Bank Street became overcrowded, it was thought best to remove the Novitiate to Carthage, the Colored children following shortly afterward. In a few years more the Magdalens also moved to the country, with its delightful air and peaceful quiet, which proved a real God-send to all. The Carthage Convent was called "Our Lady of the Woods," a fitting title to a place with such splendid surroundings."  (source: Treman, L. A., "For Fifty Years the Sisters of the Good Shepherd Have Been Laboring in Cincinnati in the Noblest of Charities," Catholic Telegraph,  Feb. 21, 1907,  p. 1)

In a letter to Archbishop Purcell from the Bank Street convent on Aug. 17, 1871, Mother M. of St. Joseph David details the acquisition of a new site for the Sisters of the Good Shepherd:

"Having had your permission to do as I found best with regard to procuring a country place for our young children, I have availed myself of the first offer suited to our means of payment.

"We have purchased a little farm of 20 acres, 7 miles outside the city, & one mile east of Carthage, for the sum of $4150//00 . I have had it visited by a Gentleman friend of our house, who found it very cheap. The soil is good, & cultivated except one acre of woods. Several acres are planted in fruit trees & grapevines. There is only a small frame building on it containing six rooms with a large stable & other out [houses?]

"Mr. [R.?]. King and the Father of one of our Sisters have attended to all for us so that we have not had any trouble, except to procure the money and sign the mortgage. We have paid $2000 00 the remaining $2150 00 is to be paid at the expiration of one year. I regret not being able to take our children out there now, We will be obliged to have a house built for them first. Still I hope that by having a man to cultivate the ground we will have some supply of vegetables & fruits for our house until we are able to build." (source: Purcell Papers, Correspondence, 1871, Box 19, Folder 80, Archdiocese of Cincinnati Archives)

"A school was opened in September, 1878...The old frame house [Gano homestead, from Bank St.] was carefully taken apart and rebuilt on the farm, where it became the home of destitute colored children, by whom it was occupied until they moved into the present fine brick building, constructed for them at "Our Lady of the Woods."  A contribution of $1,000 was given by Mother Mary Catharine Drexel towards the erection of this house, and $2,000 were received from the Colored Fund through His Eminence, Cardinal Gibbons. " (source:  Souvenir Album of American Cities - Catholic Churches of Cincinnati and Hamilton County, 1896,  p. 169. http://cdm16998.contentdm.oclc.org/cdm/ref/collection/p16998coll15/id/205474)

The Novitiate and Provincial House were transferred to  Our Lady of the Woods in 1892, and the institution was incorporated in the State of Ohio in 1899 (source: Centenary of the Sisters of the Good Shepherd in Cincinnati 1857-1957 [printed booklet], [1957?])

In 1896, the Souvenir Album of American Cities - Catholic Churches of Cincinnati and Hamilton County noted:  "The buildings are detached and were erected at different periods. Combined they occupy a space 500 x 500 feet. They are built of brick and stone, with the exception of the old Gano Homestead which is frame. There are at present in the institution 73 Professed Sisters and Novices of the Good Shepherd Order, 62 Magdalen Sisters, 110 girls in the Industrial School for White Girls and 90 girls in the Industrial School of St. Peter Claver, for Colored Girls. St. Peter Claver Industrial School is the largest institution of its kind in the world for colored girls."

Next section: The Chapel 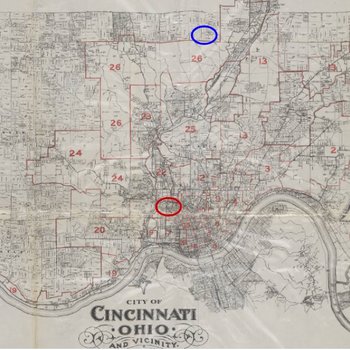 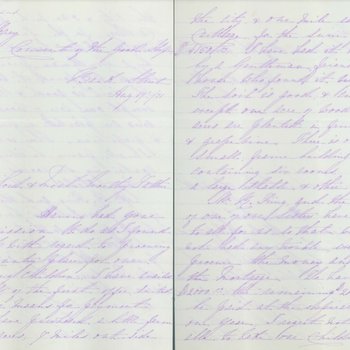 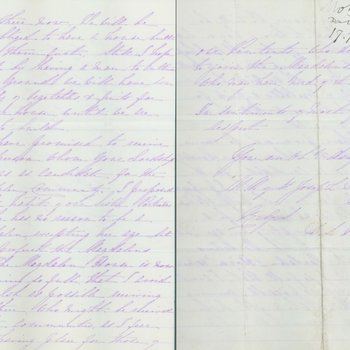 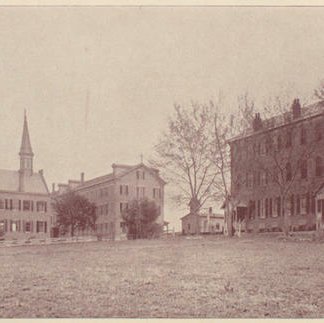