An article in March 1911 in the Catholic Telegraph provided an update on the plans for the new chapel on the grounds of Our Lady of the Good Shepherd: "It was previously announced in these columns that the Sisters of the Good Shepherd in Carthage, Ohio, were about to build a new chapel.  Anyone acquainted with conditions at the Provincial House can appreciate the need of such a structure.  For a number of years the 600 souls who make up the Institution have tried to satisfy their devotions in an apartment that is ill-suited to the purpose of a chapel.  The Sisters themselves, whose life of toil and prayer in behalf of those committed to them is a severe strain on mind and body, have sacrificed the ordinary comforts of a Monastery home.  They are now caring for upwards of 400 girls; these are divided into four classes.  The Reformatory for colored girls has about 110; the Preservation class for colored girls average 175; the Reformatory for white girls numbers about 50; the Preservation class for white girls about 100.  These classes never intermingle; they are kept apart in the living rooms, recreation, and in the chapel.  Then there is the Magdalen Community, a Penitential Class of women recruited from the Penitents, who live in seclusion and devote their time to work and prayer, and who must be cared for.  The Sisters and Novices complete the Community.  The distinction and separation necessary to be observed, determine the unusual form of church buildingto be found with Good Shepherd Communities.  That form is a cross but the structure to be created at Carthage will be an octagon shape to provide separate chapels for the different divisions of the community which at present are large in number and more than likely will increase.  These chapels will all converge to a central altar ...  The work of construction, which will be taken up in earnest this present week, was inaugurated on the Feast of St. Joseph by a procession, in which the Sisters and children participated, to the spot where the chapel is to stand:  this was blessed by the chaplain, Rev. Father Stein, while the Sisters chanted the Litany of All Saints.  The work is placed under the patronage of St. Joseph.  It is hoped that with this protection no untoward circumstance will occur to stay or interrupt the erection of the structure which is a necessity and which will be an ornament to the diocese." (source: "New Chapel for Sisters of the Good Shepherd," Catholic Telegraph, March 23, 1911, p. 5)

The cornerstone was laid on April 21, 1912. By 1921, plastering, stained glass windows and carpenter work, plus building a tunnel for heat, still remained incomplete. Archbishop Moeller wrote to Mother M. of St. Stanislaus, October 19, 1921, giving her permission "to finish the new Chapel of the Sisters of the Good Shepherd, Carthage, at a cost not to exceed $70,000."  (Moeller papers,  Archdiocese of Cincinnati Archives, Series 01.04-02 Outgoing Correspondence 1921 (A-R), Box 13)

Next section: Stained Glass and Other Art and Artifacts 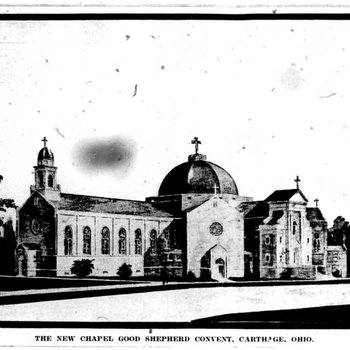 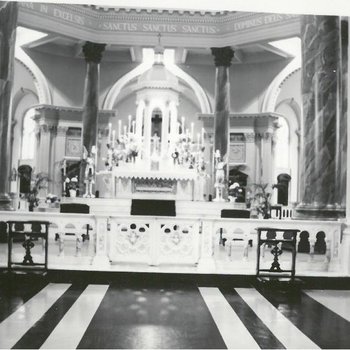 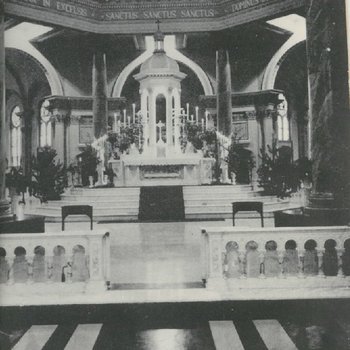 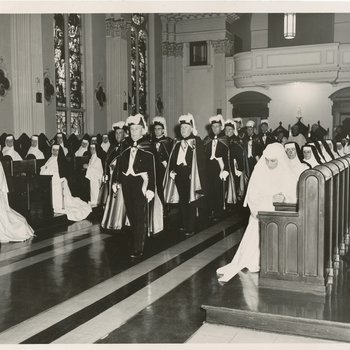 Knights of Columbus Procession during Centenary Celebration, May 6, 1957 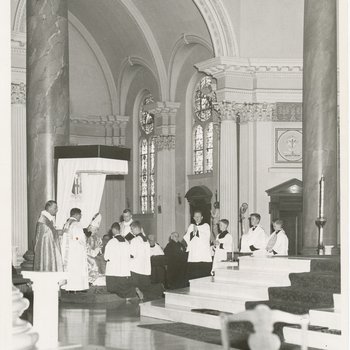 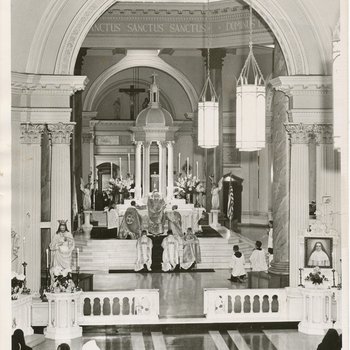 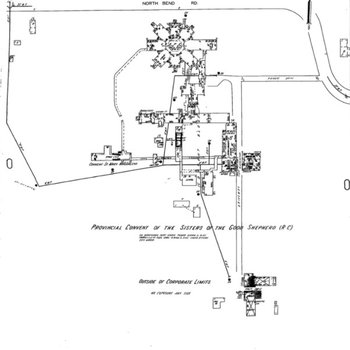 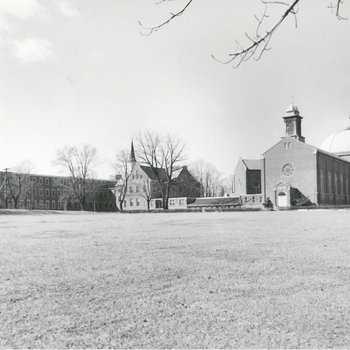 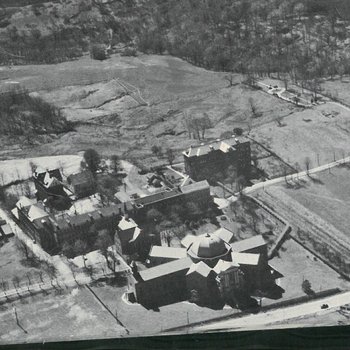