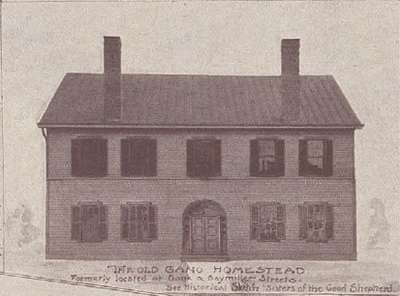 "The Sisters could not allow the old frame house, endeared to them by so many associations, to revert to secular uses or fall into decay, so it was carefully taken apart and rebuilt on the farm, where it became the home of destitute colored children, by whom it was occupied until they moved into the present fine brick building, constructed for them at 'Our Lady of the Woods.' A contribution of $1,000 was given by Mother Mary Catharine Drexel towards the erection of this house, and $2,000 were received from the Colored Fund through His Eminence, Cardinal Gibbons." (Source: Souvenir Album of American Cities, Catholic Churches of Cincinnati and Hamilton County, Ohio, Edition. United States Church Album Publishing Company, 1896, p. 169, accessed from http://classic.cincinnatilibrary.org/record=b3194954~S1)