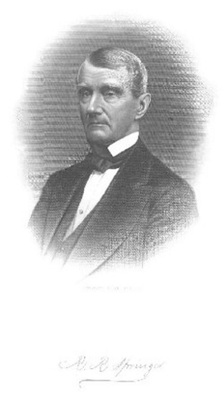 Reuben Runyan Springer (1800-1884), a prominent Cincinnati philanthropist, was a significant benefactor of the Sisters of the Good Shepherd. He is best known for his role in establishing Cincinnati Music Hall and the College Conservatory of Music. Springer made his fortune early, becoming a partner in Kilgour, Taylor and Co., a Cincinnati wholesale grocery firm, after marrying Jane Kilgour, his partner's daughter. His wealth grew through investments in banking, railroads, and real estate, allowing him to retire due to declining health at age 40. He and his wife then traveled extensively in Europe, immersing themselves in culture. Springer was not raised with strong religious beliefs, but his wife came from a prominent Catholic family. He embraced her religion and was a generous supporter of Catholic institutions including St. Peter in Chains Cathedral, the Convent of the Good Shepherd, a home for wayward girls, and numerous hospitals and orphanages. Source: Biographical Cyclopaedia and Portrait Gallery with an Historical Sketch of the State of Ohio, , Volume 2, 1884.