Home > College of Arts and Sciences > University Professor of Faith and Culture > Whose Faith? Whose Culture? > 8

Interviews: Whose Faith? Whose Culture? 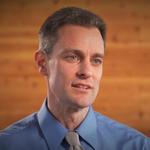 The Faith and the Spirit Are In The Culture: Dr. Damian Costello on Faith and Culture

University Professor of Faith and Culture

In this heartfelt interview, Dr. Costello takes us through his work on Nicholas Black Elk and Lakota Catholicism, using it as an intellectual wellspring from which to describe his own unique take on faith and culture. We typically think of culture as something separate from faith and spirituality - something to be infused with our separate spirituality. But what if, in fact, our culture, our material setting, our natural world and community of birth, is in fact already a manifestation of our faith, is already a spirituality, in and of itself? This is a major distinction that marks Lakota and other indigenous American understandings of faith and culture as different from a predominantly European or traditional Western understanding. There's a great lesson to be had there, says Dr. Costello, especially for Christians in their understanding of what exactly culture is, and how it ought to be understood.

Please note that the transcript/subtitles for this interview will be available soon. Please see above for an audio-only (podcast) version of this interview.

Costello, Damian PhD, "The Faith and the Spirit Are In The Culture: Dr. Damian Costello on Faith and Culture" (2021). Interviews: Whose Faith? Whose Culture?. 8.
https://ecommons.udayton.edu/faith_culture_wfwc/8