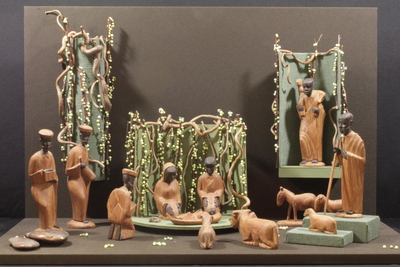 Art historians lament the poverty of traditional artistic creation in some of the regions of East Africa. Among the reasons given are the migrant lifestyle of many tribes, and the absence of the cult of the ancestors, which frequently constitutes an important source of inspiration for arts and crafts. As for Tanzania, religious arts and crafts are due mainly to the influence of missionaries. Woodcarvers have gained certain prominence amond the Makonde tribes in southern Tanzania. Alas, their craftsmanship caters mainly to tourists, and goes by the somewhat pejorative designation of "airport art." This nativity set of light wood, with blackened faces and hands to suggest ebony, belongs to the Makonde tradition. It may not be one of the prized Neapolitan crèches, but in this set there is beauty to be discovered. Take a look at the stance and demeanor of the shepherds and wise men. There is a secret rhythm and movement in these figures produced by the subtle bending of shoulders and knees. It seems as if they were engaged in a silent ballet hailing the newborn king. Mary and Joseph are assuming postures reminiscent of age-old techniques of meditation. Kneeling, and with open hands resting on their thighs, they are absorbed in contemplation of the meaning and future of this baby. Towering over the scene, there is a shepherd with a sheep on his shoulders. He somehow announces and stands for the future role and mission of the Christ child. Jesus Christ is the good shepherd gathering the lost and hurt.