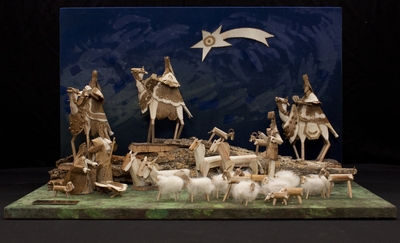 A very old theological tradition says about the Incarnation that what is not assumed cannot be redeemed. Jesus Christ assumed human nature and human culture, our psyche, and a piece of our geography. He did not assume sin but identified with our woes. Some of this radical identification with human reality can be seen in the wide variety of materials used to create Nativity sets. There are not only crèches made of resin and polymer. Although the more common materials have been wood and clay, we also have Nativity sets made from wax and straw, peat and bone, or, as in this scene, from the leaves, twigs and little branches of the giant fennel (ferulae). Ferula is a genus of stately herbaceous perennials, native to the Mediterranean, western and central Asia. Sardinia being an island of the Mediterranean Sea, the giant fennel is one of the typical and common materials used by the natives. It was the genius of the artist, which made the giant fennel come alive as gentle piglet, stately horse, and majestic camel.

Set depicting the nativity of Jesus made by G. Serra in Italy from bark, twigs, and other material from the giant fennel plant. Exhibition label originally written by Fr. Johann G. Roten, S.M. for exhibit entitled "At The Manger" and held at Roesch Library, University of Dayton.