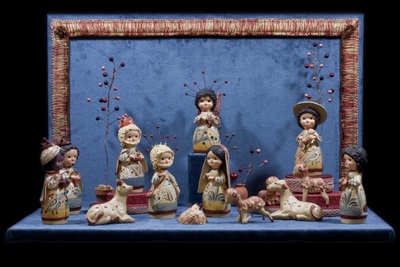 The common look of Mexican nativity sets shows doll-like figures with pretty smiling faces and “antennae” on their heard. Are we speaking of a new generation of the little green men and women from Mars? Common as they may be, these figures are not the sole representatives of Mexico’s Christmas tradition. Mexico has one of the richest and most diverse crèche cultures in the world, ranging from simple straw cribs to the classical nativity set going back to the reign of emperor Maximilian. Back to our question. These are not antennae but splintered haloes, sometimes called effulgent halos. A halo designates the Christian saint. It is used in other religious traditions to identify gods and goddesses as well as emperors and important people. We know of splintered halos going back to the 2nd century ornating the head of Dionysius. Aside from references in the pre-Christian cultures of Latin America there are the two rays of light coming out of Moses' head identifying his closeness to God and his mission as leader of the people.