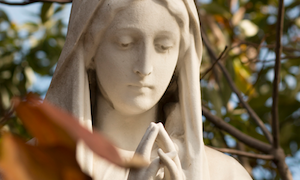 Vatican II highlights the relation between Mary and the Church. What are the theological and more practical consequences of this new/old vision? Did it impact the place of Mary in the Church in liturgy, spirituality, theology? Is the Church more Marian? Are we more Marian? What could that mean? What should we learn from the past for the present and the future?

On April 8, 2016 we joined together, across the globe in real time, to listen and discuss two presentations on the subject of Mary's Place in Today's Church.

Fr. Thomas Buffer, Lecturer at the International Marian Research Institute, discussed that in today's world, it is not enough to argue for the existence of God or defend the Faith; we have to defend the existence, beliefs, and practices of the Church to those who claim it is an obstacle to belief or to a happy life. When we talk about the Church, are we also talking about Mary to help others understand it better? If so, what is the best way to do it? What should we avoid? In this effort, the religious literature of the first eight Christian centuries, also known as the patristic era, can offer some helpful pointers for us in the twenty-first century.

Dr. Dennis Doyle, University of Dayton professor, focused on the Pilgrim Church in its journey on earth can become a more Marian Church. What might that look like? In its seventh chapter, Vatican II's Lumen gentium spoke of the Church as the Communion of Saints made up simultaneously of the Pilgrim Church in its journey on earth and the Heavenly Church in its eternal fulllness. The eighth chapter focused on Mary as a shining example of one whose historical and eternal life have blended perfectly these dimensions. Mary is herself a type of the Church. The Heavenly Church is already as Marian as it can be. This Heavenly Church exists not only in the far-off future, but is always present within the Pilgrim Church as it makes its journey. As the German Jesuit Otto Semmelroth wrote, "this presence is not simply in the Church in the manner in which the train from Hamburg to Munich is called 'the Munich train.' It is, rather, already integral and dynamic."

The document available for download is a rough transcript from the presentation.