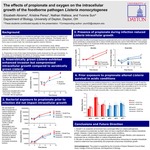 Listeria monocytogenes causes foodborne illnesses in immunocompromised individuals by colonizing the human intestine and disseminating to peripheral organs by crossing the intestinal barrier. During infections, Listeria adapts to the intestinal environment, which is low in oxygen but rich in fermentation acids. However, it is unclear how these acids influence Listeria pathogenesis under anaerobic conditions. In this study, we investigated the effects of anaerobic exposure to propionate, a major fermentation acid, on Listeria. To test the effect of propionate, we used a macrophage cell line as our model host cells and monitored the intracellular growth of Listeria after exposure to different levels of propionate under both aerobic and anaerobic conditions. Results showed that while anaerobically grown Listeria was compromised during late stages of intracellular growth compared to aerobically grown bacteria, supplementation of propionate at 15mM did not significantly impact intracellular growth. Survival and escape from the acidifying phagosomes is critical during Listeria intracellular growth. To test the effects of propionate on Listeria survival in acidic conditions, we conducted survival assays with aerobically and anaerobically grown Listeria after 1 hour exposure to pH 4, 5, 6, or 7 buffers. Our data showed that Listeria was not able to survive in the pH 4 buffer. For anaerobically grown Listeria, survival at pH 5 was significantly reduced compared to survival at pH 6 and 7. Propionate supplementations did not cause a significant change in survival. Together, our data suggest that anaerobic exposure, not propionate at 15mM, played an important role in Listeria pathogenesis. We plan to continue our investigations with higher concentrations of propionate. Ultimately, our research will help elucidate the behavior of Listeria during the intestinal phase of infections.

"The effects of propionate and oxygen on the intracellular growth of the foodborne pathogen Listeria monocytogenes" (2016). Stander Symposium Projects. 823.
https://ecommons.udayton.edu/stander_posters/823