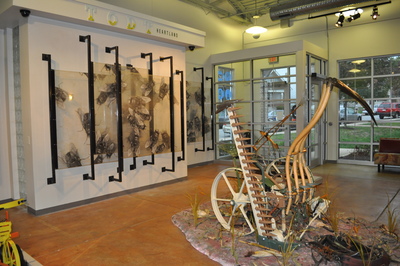 Imagine a world of breakthrough technological advances funded by governments and the military. Ask yourself, “What if these advances resulted in a nuclear fallout?” The Artist Collective TODT imagines a world leading up to the collapse and creates artworks that represent the new landscape after the fallout. Over the past three decades, the anonymous art collective has exhibited globally such works focused around these questions. The group formed in the late 1970s as one of the first collectives in which the members nullify their individual identities and assert a collective identity known as TODT. The name ironically references the civil and military engineering group of the Third Reich, and “TODT” translated from German means “death squared.”

Heartland is a two-venue exhibition of TODT’s series of artworks entitled “Heartland,” a selection of new and existing works from the collective’s New York and Philadelphia studios. The exhibit features two-dimensional and sculptural works depicting a surreal world and excessive distillation of technical culture. Located at ArtStreet’s Studio D Gallery and Gallery 249, the show explores technology, science and rural Americana. The exhibits represent a merging of themes related to industrialization, militarization and agribusiness.